It was after church
and after noon,
and the sun lay on the town
like eternal damnation’s despair.
Miranda sat on the veranda
holding her panda
while Amanda fanned her
with a palm frond.
Behind the oleanders,
her brother Alexander
and her cousin Leander
fondled each other.
Sister Lorna lounged on a lawn chair
languid as the lilies
sleeping on the pond
in the languorous afternoon.
Her beloved Papá, the Commander,
snored in his wicker rocker.
The cicadas in the yews
harmonized on their kazoos
and the mockingbirds slept,
too weary to mimic their buzz.
Flies circled the lemonade,
dipping and sipping
from pitcher and tumblers
sticky with sugar
retreating ice cubes left.
Silk rustled in the stillness.
Miranda thought of dry grasses
rubbing helplessly in a moaning wind.
The cicadas went silent.
The Commander woke.
Alexander left off fondling Leander.
Amanda laid aside her palm frond.
The lilies slept on the quiet pond.
Lorna lifted her head, her limp locks
slipping over her shoulders.
The flies, flush with lemonade,
settled on the rim of the pitcher
and waited with motionless wings.
A fungus-pale face emerged,
like a Polaroid developing,
above the yew shaded walk.
Under the face the darker shadows
formed into a gown
five generations out of fashion.
A fierce old woman stood
in mourning silk and laces
just on the edge of the sun
like a raven with ill tidings.
Miranda on the verandah
shivered and squeezed her panda.
Amanda turned and hurried into the house
crossing her bosom in panic.
Leander and Alexander peeped
through the branching oleander.
Languorous Lorna leapt from her lawn chair.
The Commander rose from his wicker rocker,
to peer at the figure on the walk.
“Great Aunt Cassandra’s Ghost!”
he exclaimed and fell back in the rocker.
It creaked under his weight.
The apparition laughed.
The screech was nerve-destroying,
like a death cry of dolphins.
“Not sober, Nephew Evander?
Too much rum in the lemonade?”
The ghostly whisper
rattled like dry sticks.
The Commander forbore to answer.
Miranda’s Mamá,
Amanda behind her,
drifted onto the verandah
dressed in blue linen
pale as water
under a winter sky.
“Great Aunt Cassandra,
what a lovely surprise!”
Her voice was a flute song,
liquid melody in the languid heat.
“Do come perch on the porch.
We’ve lemonade, already made.”
“Great Aunt Cassandra
died a hundred years ago, Mamá.”
Lorna’s voice was harsh and sour.
“I don’t think we’ve lemonade
enough to wet her bones.”
Mamá Letitia’s fluting voice
rose to a gargling shriek
as she slumped to the porch.
She lay there like water
spilled in a puddle
waiting for the sun
to suck it up.
Miranda held her panda
in front of her to defend her.
“By the holy jacaranda,
sacred to the best of families,”
she demanded of the apparition,
“what brings you here,
Great Aunt Cassandra’s Ghost?”
The menacing whisper was clear
though it did not stir the heat-heavy air.
“The Yankees are coming!
They’ve burned Atlanta!
The Yankees are coming!
They’re marching on Savannah!
Beware!  Beware!  Beware!”
With a loud ululation
the apparition evaporated.
In the silence that followed,
the cicadas began to croon
in the summer afternoon.
The thirsty flies
dived into the lemonade.
Amanda lifted Mamá Letitia
from the verandah
to carry her into the gloom
that huddled in the house.
Leander caressed Alexander.
Alexander giggled among the oleanders.
Sister Lorna reclined on the lawn chair,
her fingers twisting her limp locks.
Commander Sanders snored again,
a gentle sound, like muffled tubas
keeping the beat for a distant band.
Miranda hugged her panda
and prayed on the verandah
for the repose of ancestral souls. 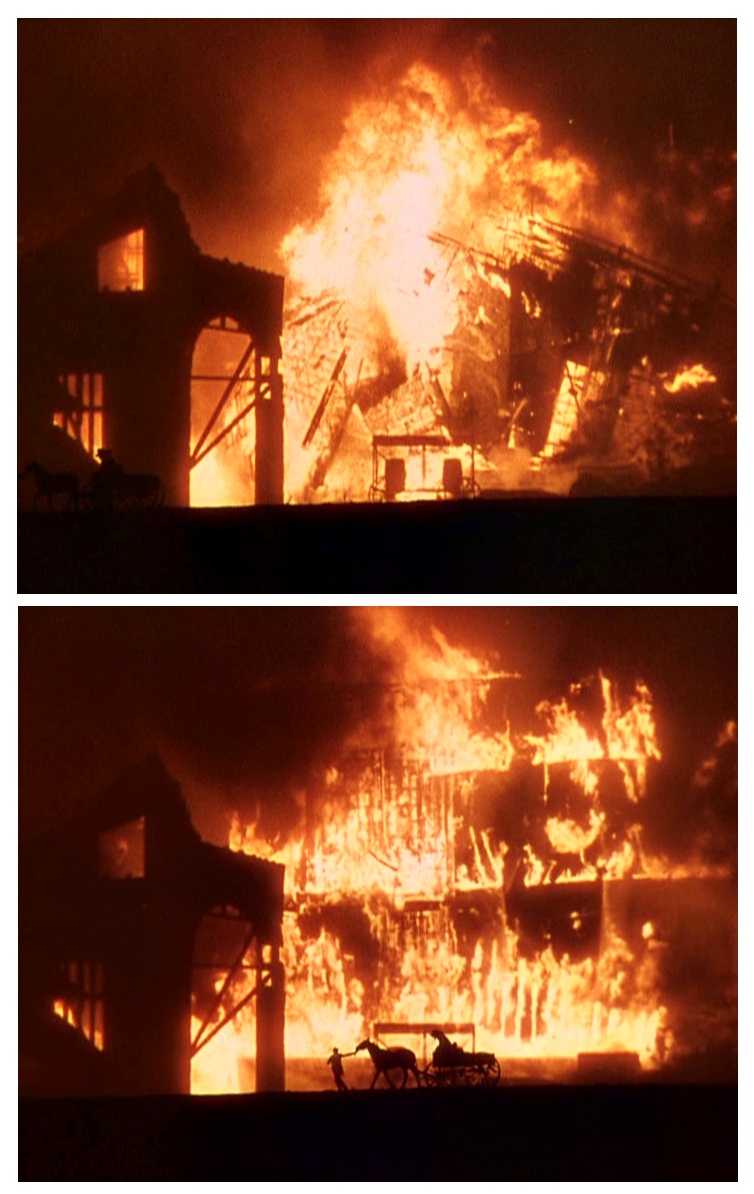 Burning of Atlanta, scenes from "Gone with the Wind" (1939)
Posted by DuanesPoeTree at 2:03 PM