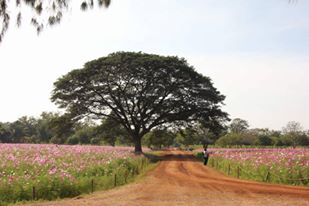 Posted by DuanesPoeTree at 9:31 PM No comments:

Email ThisBlogThis!Share to TwitterShare to FacebookShare to Pinterest
Labels: Sirinya

Johnny has gone for a soldier

lukewarm
coffee as
the sun
comes up
an oldies
station
on the
car radio
and I'm
leaning in
to the
punches
to take
the sting
off singing
along with
the Beatles
and smoking
the first
light of
day through
my windshield
its 6am
and things
might not
get any
better than
this so
I take
the second
to notice
light hit
the street
as clouds
move like
a train
across the
horizon
carrying soldiers
back to
a war
that only
I can
still see.

At last – the end of another self-imposed, flexi-time day. “My tray is never empty; my work is never done” sighed Selene, with a yawn.

As vacation time loomed up on the horizon, Selene felt catapulted out of her present, straddled time, became awash with memories and anticipation. She felt so fulfilled, so sustained by that special experience – and replayed it constantly in her mind, for years on end. On reflection, she realised she had made three crucial choices, and began to think of an alternative, imaginary dénouement of her grand scenario. Indeed she had delicious reminiscences, retrospectively savouring of perfection. But memories were not quite enough; they were tasty dishes in need of spices – the senses must again be engaged directly; the lubricating oil must be applied, literally and metaphorically. She ached with the need to be reassured by something immediate and tangible, to revive and extend her experience – go happy to heaven, and let her wings grow, after being fulfilled on earth. Selene was determined to earn her heavenly robes.

But all experiences are selective, and involve the exclusion of at least one alternative. How would the composite of her past scenario have worked out if she had not given herself to the boy, but left him with a focus for the ‘out of reach’? That option might just have kept him out of that trouble with the local police, which she witnessed – the possibility that he got exposed to police brutality, or badly injured. What would it have been if her surging impulse had overridden her circumspection, and she had given herself to Hudson at the top of that temple – and then once again near the surging waves – two mirror consummations – embracing the spiritual and the elemental, as she had embraced the safe, comfortable and material in the bridal suite? Did that cushioned luxury detract from her peak experience? For years it had felt perfect in retrospect – but now it had a slight tinge of compromise.

A revisitation of that idyllic locale started hatching in her mind. Her intervening holidays, mainly at Health Centres, had all been reasonably satisfying, but low-key. The other participants were all very pretty, but lacking in charisma. The chief bonus of those trips was that they made her feel better afterwards. They did their job, as did the palliatives of her favourite glamour videos. But memories and spectacles cannot be all-sustaining. Now was the time for her to do something different, while health still permitted – to some degree emulate her one gesture of bravado. Some couples booked the same location, the same hotel, every year – Selene had to space things out a bit more to gain perspective.

Goodness knows, a lot of people involved in her work called her a ‘professional cynic’ – though her friend Janice always accused her of wishy-washy idealism. The prospect of a ‘repeat’ expedition naturally had some feeling of déjà vu and possible anti-climax; goodness knows she had had enough wasted journeys and let-downs in her life – though those were all separate from her holidays. She had, however, avoided the bathos of a failed couple vacation. Like a voice of anti-conscience, there was the still-present figure of Janice, ready to sneer on the sidelines – though now with some restraint against the background of marital troubles. And the world had moved on at its grinding, accelerating tempo, becoming ever harder-edged. The challenging, positive alternatives were literally, physically, life-threatening – falling down precipices, being attacked by big game animals – she could not quite bring herself to that. Selene always found surgery quite scary. She accepted that those who could face such hazards were far greater than herself. Heroes and heroines are always to be applauded. Perhaps the Duke of Edinburgh Award on her wall might have been a tasty addition to her interior decor. But she did not really feel hero-worship of those who had got it.

That volatile country had recently become quite prominent in the news; there had been quite a lot of unrest, strikes, suspicions of drug trafficking, struggles for indigenous land rights – as well as some build-up of tacky tourism – mercifully not too much, and the worst of the British tourists hadn’t latched on to it yet. They seemed to have copied the example of Greece – too a much lesser extent, but still considerably to their cost. Having some time ago graduated to the Credit Card zone, she did not, this time round, need to skimp so ruthlessly to finance her trip, which in some ways detracted a little from the anticipation. Is there diminished sense of satisfaction in an achievement when there is less of an effort to make it?

Re-enacting her ritual of anticipation, Selene did her grand ceremony of self-admiration in the mirror. As she had then adored herself as a bathing belle, she now dressed up in a shimmering white robe, obtained from a retro costumier, fitting for a sublime priestess of primordial glory to perform her ritual of sacred seduction, and mutate into a deity. It could have been inspired by any one of a mass of ancient civilisations, or by all ancient civilisations – many of them cross-fertilised each other through exploration and trade. She truly loved, was fascinated by her own body, both diaphanously veiled and fully revealed – yearning for her mirror ego to be enraptured by her while feeding her yearnings with a lovely, matching physique. Her robed body felt to her like an exquisite ethereal form swaying, swayed by caressing clouds. Her quivering hands did the work of the breeze; the robes drifted off to herald the radiant sunlight beauty of her body.

She had to admit to herself that, in the course of her work and her leisure, she felt twinges of envy of those young things coming off the tour buses, in their first flush, beaming with their backpacks, viral and global – all exuberant, queuing up outside the Discos – apparently not a care in the world, and all their lives glowing before them. But of course they had a lot to learn – disillusionments, upsets and all, and they would have their quota of traumas and tragedies. Maybe she might comfort one or two of them en route, enlighten them with her wisdom – after all, she radiated experience, automatically commanding respect. If she was really lucky, she might meet a shy one, to bring out of her shell, and carry her essence into the next generation.

Yes; the years, life’s inescapable overloads, and world-weariness, were beginning to creep up on her, but Selene determined to remain well-preserved. Whatever the stresses, her regimes stood firm; diet and ointments kept the lines at bay. She unfailingly convinced others of her success, if not always herself. Around her, of course, the times had moved on at an increasingly accelerated pace, and modes of behaviour shifted. So, with today’s cynical worldly wisdom, what now were her chances of meeting a beautiful stranger out of the blue, and for that beauty to have a decisive impact on her? Now she was wired up to the internet, and it was a la mode to advertise for a partner, for a rendezvous. Still anxious to move with the times, she overcame her initial reluctance in that area. Well; if it did turn out to be a fiasco, there were so many others with comparable experiences that she would have the sanctuary of anonymity and oblivion. And, like everyone else, she must make a stand against ageism.

Now, on the streets and on the computer screen, there were so many good looks around that it was extremely hard to be selective. But she certainly didn’t want anyone too young – whoever it was to be had to have a touch of weather-beaten maturity. And preferably someone who had been hurt, as that would generate underlying compassion.

She was impressed by Melville’s CV – so experienced and distinguished, and got him to send her his picture – a gesture she did not reciprocate – as she had to play ‘mysterious’, let him build up a mental picture of her until she introduced herself to him, and make him gauge the differences. His image radiated toned fitness tempered with sensitivity – and she was drawn in by those penetrating but benign eyes! For their introduction she arranged a date in the badminton hall of her local health centre, where she could see him playing with several of the others, and she would get a clear impression of how he flexed his body; then, at the right moment, she would introduce herself.

That svelte figure, in white top and black shorts, shone three-dimensionally through her response to the picture and her anticipation. By coincidence, she wore a matching outfit.

“You satisfy my expectations, and my imagination” he replied.” Melville had the usual array of images to help him formulate his ideals. This encounter certainly passed the acid test of reality!

“Ok; I’m your partner! Let’s do our game. I want you to give it your all, as if I were your deadly rival; and I will reciprocate. We shall be mutual catalysts of rivalry!”

The match must have lasted an hour and a half; with him she applied all her strength, in turn stretching him fully. The sight of his swinging arms, legs, shoulders and trunk enthralled her utterly. She could have defeated him, but instead allowed him to win by one point; she must tap his adrenaline further. In her anticipation of what was to come, she began to oscillate between a consummation and a rejection, which could be a grand liberator of his mind; after all, in the words of the Lady of Infinite Wisdom, ‘Rejection is the greatest aphrodisiac’. Or perhaps, as with Hudson, an initial rejection adding spice to a consummation. The administration of pain can be a benevolent act. Pleasantly half-blind about how this adventure might map out, she arranged the flight and the hotel booking, and he worthily paid his share. According to her rules, they must not travel out there together, but meet at the destination. Melville would take his plane 12 hours after she took hers.
Posted by DuanesPoeTree at 8:12 PM No comments: