The Emergence of Craft Typewriters

Lit the wick of the collecting typist
Brighter than a twenty-nine D’Yquem.
Their passion for vintage originals
soon captured all available supply,
leaving the elbow-patched tweed Underground
with barn finds in need of restoration.

Enter the dippers and the re-keyers
Bringing back the glass, the gloss, the strike
The promising clatter of the new
Manual lifted from its unclasped case
And placed on a desk for the first time
As if the owner were transported back
To the age of mechanical goodness
When novels rose with the sound of keys.

Ian Fleming’s Gold Royal was legend
and customizing by the Underground
bonding in dark corners with their machines
followed as naturally as a sheet roll—
initially a modest monogram,
pinstriping, or perhaps a small cartouche

then the fitting of hand to carriage,
keyboard cutting, stretching and channeling,
short-throw shifting and feather light touch
for the performance driven hot-rodder
who joined clandestine typewriter speed trials,
text-races, page sprints, scroll-rallies, chickie-runs
and the infamous ten days of Simenon
which destroyed the bodies, psyches and hands
of many a typist unprepared for
the manic determination required
to complete the rigors of the course
and to emerge with a witty novel
polished, fulfilled and ready for release
at the moment of day ten’s midnight hour.

The extreme is driven by progression
The artisan becoming inventor
when customizing loses romance,
and so it was that D.H. Spittingly
(nee Arthur Tremble) made a craft machine
in his East Peoria machine shop.

A novelty, a cheap gimmick, a fraud
Declared the curators and collectors
Apostasy claimed the purists and the priests
Who lived by the law of the custom-mod,
But Spittingly had made a machine fraiche
a bold, clear and effective design
graced with swooping curves and garnet keys,
and before year’s end, he was not alone. 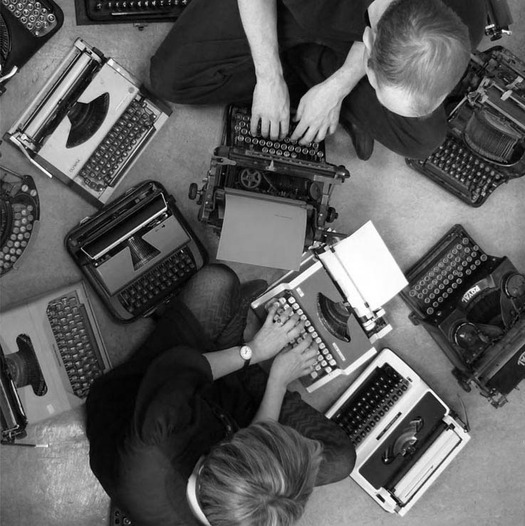