Before leaving for the college town
where she imagines starting over,
she visits her grandmother’s city
one more time. Next time
she’ll return for the funeral.
She’ll be whisked in and out.
“Nothing to see here. Nothing.”
The hearse will pull out
onto empty Summer Street.
This time the granddaughter
departs from the depot
tucked behind Market Basket.
The train leaves precisely at five.
Heading for Lunenburg Street,
she passes the smoke stack,
all that remains of the plant

where her grandparents met.
She pretends that her grandmother
still lives in her red house.
At practically 100, her life
would have shrunk to fit
into one room,
television, tables,
racks of clothing,
chairs, commode,
all obstacles in a maze
that she would wander.
The kitchen,
the built-in book shelves
of 1920s novels
(The Office Wife, The Private Life

of Helen of Troy)
might as well have been
in someone else’s house.
The lilac shading the porch
might as well
have not grown back.
She thinks of her grandmother,
her life shrunk to one bed
in one room in another city
and wonders if, in her mind,
she wanders these streets
past stores now closed
and homes now vacant,
some even demolished,
if in her mind,
she is skipping uptown,
her city
burned into memory. 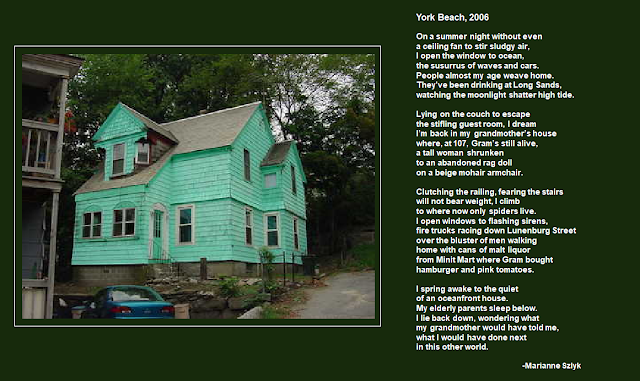 [Here is a picture of my grandmother's house.  The late Angelee Deodhar found that picture somewhere on the internet.  I was amazed by that.  When my grandmother owned the house, it was much more attractive: gray with red trim and lots of flowers in the yard.  That house has been through a lot since my grandmother sold it in 1978. --Marianne] 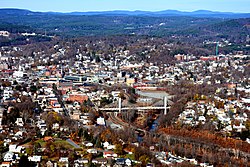 Posted by DuanesPoeTree at 5:58 PM