INTERVIEWS ACROSS THE CENTURIES
With Sappho, Isle of Lesbos, Asia Minor - 630 BC-570 BC – Part II

Δέδυκε μὲν ἀ σελάννα
καὶ Πληίαδες· μέσαι δὲ
νύκτες, παρὰ δ’ ἔρχετ’ ὤρα,
ἔγω δὲ μόνα κατεύδω
The sinking moon has left the sky,
The Pleiades have also gone.
Midnight comes—and goes, the hours fly
And solitary still, I lie,
Sappho says, and I whisper:
O night! You who commands all to sleep and silence
So souls can start their eternal converse.
How I’ve always wished to utter this soulful dialogue
With each one of the human family
Across the centuries .. Through the whole universe!
Sappho dear, how come in solitary still you lie
And I’m here. Our souls will soon be dancing
As souls never ever know how to die?
S- Αστερεσ μέν ἀμφι κάλαν σελάνναν
ἆιψ ἀπυκρύπτοισι φάεννον εἶδοσ,
ὄπποτα πλήθοισα μάλιστα λάμπησ
ἀργυρια γᾶν
The stars about the fair moon in their turn hide their bright
face when she at about her full lights up all earth with silver.
G- I don’t believe that our souls have finally met
But is that all mortals wish to get?
All what we aspire can be told within one sigh
If only mortal passions weren’t a big lie.
S- ψαύην δ' οὐ δοκίμωμ' ὀράνω †δυσπαχέα†
/ Πσαύην δ᾽ οὐ δοκίμοιμ᾽ ὀράνω δύσι πάχεσιν.
With my two arms,
I don’t not aspire to touch the sky
G- You are Sappho the great Greek poetess and composer of the 6th and 7th c. B.C. They said that the great philosopher Plato said about you: Some thoughtlessly proclaim the Muses nine; A tenth is Lesbian Sappho, maid divine. So did all the ancients call you. Herodotus and Plutarch as well as other great historians mentioned you with considerable emphasis and respect. I can hear Plutarch’s words hovering through the space of time:
When I read her poems I set aside the drinking-cup in very shame. Her verses act on her listeners like an enchantment.
No woman who in any, even the least degree, could be compared to her for poetry, I hear the echo of what Strabo, the founder of geography, wrote.
Many philosophers, writers, poets have so admired your extraordinary talent and referred to your works as a rich source for poetical forms and prosody. They even refered to your metric and measure as “the Sapphic”.
Writers in the Greek Anthology called you the Child of Aphrodite and Eros, Nursling of the Graces and Persuasion, Pride of Hellas, Companion of Apollo, and prophesy your immortality. The Epigrammatists give you the title 'the flower of the Graces’.
Do you know that your image would be engraved on the coins of Mitylene, your city?
Is it true that I finally see before me the highly praised poet and music composer who inspired, through ages, playwrights, novelists, painters, sculptors and music composers to create works portraying her life?
S- Μνάσεσθαί τινά φαμι καὶ ὔστερον ἀμμέων
I think men will remember us even hereafter.
G- I wonder how a soul who left this world would feel about fame!
S- μήτε μοι μέλι μήτε μέλισσα
Neither honey nor bee for me.
G- You’re right dear!
Neither this world’s fame nor shame yoke
Would ever burden a pure soul
As our great Shakespeare once wrote to a beloved parting:
“For thee, the reed is as the oak”.
But tell me, how come I find you so beautiful though the ancients said you had been thin and dark with no attraction? It must be the radiance of your poetic spirit as I saw you so dreamy at the beginning of our conversation, just as the English Pre-Raphaelite painter Simeon Solomon, who inhabited our world between 1840 and 1905, tried to portray you in 1862 as A STUDY OF SAPPHO. I can also see you tender and elegant in the previous lines of our dialogue as the English New-Classicist painter John W. Godward, who visited our world between 1861 and 1922, depicted you in his THE DAYS OF SAPPHO, 1904. Now, at this point of our interview, you look so focused just as you were on the work of the Dutch painter Sir Lawrence Alma-Tadema, who passed his life here between 1836 and 1912, SAPPHO & ALCAEUS in 1881.
S- οἴαν τὰν ὐάκινθον ἐν ὤρεσι
ποίμενες ἄνδρες
πόσσι καταστείβοισι, χάμαι δέ
τὸ πόρφυρον ἄνθος ...
As on the hills the shepherds trample the larkspur
under foot and the flower lies empurpling in decay on the ground. 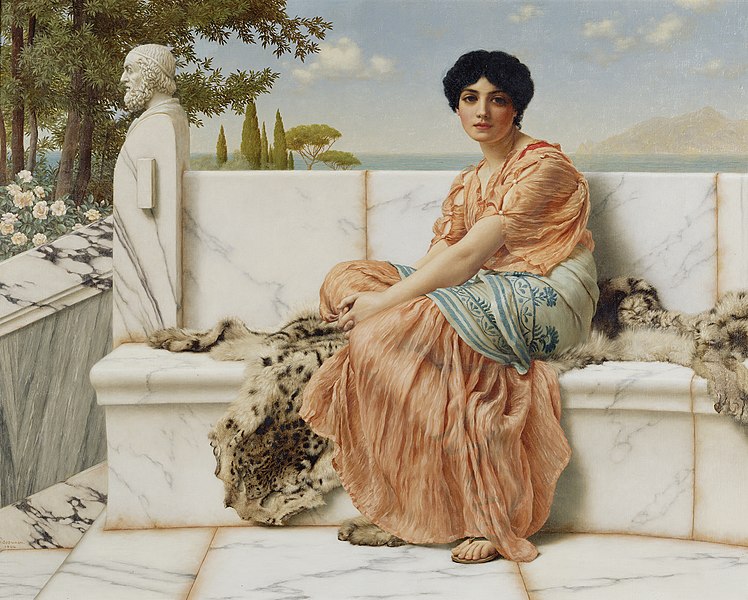 Reverie (In the Days of Sappho) -- John William Godward
Posted by DuanesPoeTree at 5:59 PM