An emaciated, wraith-like figure, with flowing white hair and robes of the purest white, came to the cave entrance. On first sight, I assumed he was a man, but on closer observation, I sensed a femininity of grace and carriage in his masculinity. His face was weather-beaten, but it really looked like well-burnished leather. He gave a nod, looking as if he had been expecting me.

“I have to congratulate you on having traced the ultimate hermit; I carefully covered up my tracks against all others. I am Fiton, magician supreme, distiller of the world’s lore. After serious deliberation and a mass of crucial personal challenges, you have taken the first steps of your destiny; I shall lead you on to the next ones.” He motioned me to sit on a mat near the fire, then passed me an earthenware goblet, with the motif of a black serpent, fangs bared before a white mouth. ‘A source of serum’ I thought. It was filled with a rancid dark red concoction, which tasted of acid; it was difficult to swallow. I nearly vomited, but not quite.


“My darling Gods, ever bickering, have made a treaty. They all need to play for time to recharge their energies. Now, as I now bear  the age of centuries, you are to be my agent, my successor: that is the potion of life protection, and the empowerment of time travel” he said. “With your new-found, absolute mobility you will oscillate, rebound between past and future at will, restructure the truths of the past, excavate them from submersion in lies and evasions; you will revise and reform the events of the future before they happen, when they are latent in the womb of potentiality. To hone your sense of direction, you will fall from the skies onto the world’s most ancient temple sites, cast down by disintegrating man-made birds. But for the present, now you are fortified, you must return to your next combat, and its benign consequence.”

(My mind drifted into the form of a 20th Century paratrooper, with the opening privilege of free fall. Those ferocious condors and the transport aircraft looped the centuries and melted into each other; the condors finally prevailed, being more in their element. I saw a wrecked aircraft embedded in ice, surprisingly free of rust – and pondered on the fate of the passengers. Skulls are not infrequently unearthed on these mountain sides)

Let calcium lines be shaved of moss, re-score all patterns. Those who change and slither shall live; those who clinch every root shall perish. In the circle all is death. Total circumscription by the circle radiates  death; through straight lines, life persists – but not without angles, not without the clinch of segmentation. And the knowledge of angles has its source in the circle. So lines and circles are forever enmeshed. At each knowing of mesh all lines are circled upon themselves. Obliterating all ends – for lines unthreaded are the most fragile of all. Circles too can cut, when they are treated as lines.

As a gesture of resentment against intrusion, one arrow and three spears quivered on the walls of the field laboratory, bouncing many omens back to their sources. In fronded pain the hut took fine gall – a ring of ashes for calamity’s brakes, resplendent ever – tarpaulins ripped to zero functioning. Protective clothing – well-ignited, threadbare it blew, blitzing a fork with gold-dust tail, rending flint and plastic shrapnel down the bleached chasm – unbolstered flotsam now, all grew.

“Remember that events are composites and convergences of disparate strands; you will be the supreme weaver, with the absolute loom, to make the ultimate chronicle tapestry. You must be prepared, honed for your task; in the process you shall know the extremes of ecstasy and agony – but your resilience has been solidified, and you will emerge supreme.” He nodded to me, and beckoned me to leave.

And so I struggled on, at last to meet more comrades, a beleaguered group of forty. When the ambush came, it was anticipated, felt in everybody’s bones. Fortunately, defensive determination and well-tempered steel prevailed; though bleeding and scarred, we could carve a corridor for our retreat.
Then through the aftermath, the bathos of corpses, shone its contrary. At the sight of that form, pure beauty suffused the stench and pain or carnage – a total balm. Benign vibrancy now outweighed the thrusts of injury. Would that the wounds were all healed, the blood returned to body circulation! Flowers burgeon on sites of carnage – but oh, to have the splendour without the agony.


But, having struggled onto a safe plateau – there was that confrontation! 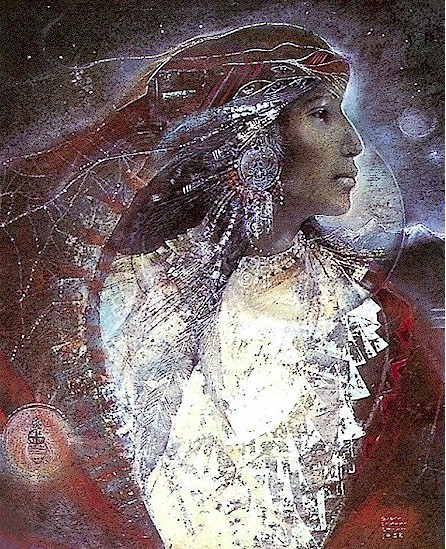 The fixed stare of her almond eyes cut through my flesh, right to my bone marrow. Though I had seen many combats, I had never before felt so challenged. I had looked some of my adversaries in the face, but in a perverse way, in spite of mortal terror, combined with revulsion against the agonised twitching of the wounded, I had somehow felt safe in the comradeship of death, I would half welcome their attacks on me as fulfilment of my destiny. Though we were adversaries, our underlying motivations were in harmony.

But now all was transformed; in the ethereal; charisma of Tegualda was something which orbited the life cycle, preceding birth and following death, a middling stream with tributaries leading to a mighty river.

“What brought you here?”

“The magic of gold, and the words of the one True God.”
“You were deceived; there are more than one – that crucified wraith of yours holds no monopoly over human destiny.”

“This has become apparent to me in my recent experience; now I am undeceived – I see I must investigate the alternatives!”

Her eyes became totally luminous and penetrating, radiating the essence of raw electricity centuries before its discovery. Faraday must have picked up on her vibration in a time-warp; I felt convinced she had given him retroactive inspiration.

“There is very little which escapes my attention. I saw all of the battle with a condor’s eye; it was you who slew my man. But you did so in fair fight; you were both honouring your duties and pledges – by practising a kind of fighting from which I myself did not flinch.

“You’d better know I was the leader of terror: I led that charge of women into your ranks, which struck such terror into your comrades, seeing us all break our chains of obedience. I was the first one to mount one of your horses – founder of the new mobility of my people. I know you have had some warrior queens, but I’m sure you never expected the subjects to act in this way.

“But now the mighty energy channelled into combat must be redirected; conflict is a means, not an end. The dead must be buried; the essence of their wounds must not infect their descendants. I think your great King wishes us all well. But his captains have brutally taken matters into their own hands.”

She performed the burial honours graciously. I half expected her to depart, but she turned back to me.
Posted by DuanesPoeTree at 8:23 PM