I had a vision of a mighty conference chamber, built in the midst of a lofty mountain range, bound by glass panels, like a gigantic greenhouse – a variant on an open plan zoo, echoing with the declamations from mankind’s political predators, sometimes cowed by the shades of eternal entities rampaging among them. I saw a contingent of soldiers, in uniforms of several centuries, hurled by an earthquake down a sheer mountain side, their every bone fractured. Tegualda resumed her exposition.

“It is my will and my mission to take you across the barrier of mortality, and back again. Your ordeals shall give you the vision of one approaching death, and one beyond it. You shall truly be of our people. We are eternally independent; after combat and death, our freedom breathes on.” 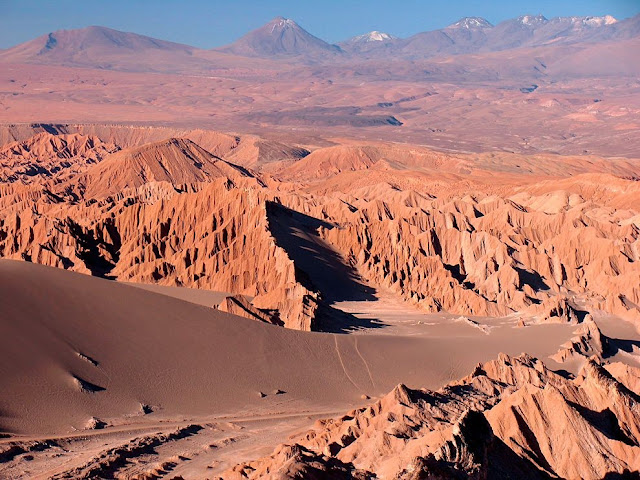 “Would you like to be transmuted into one element exclusively? Be all earth, all air, all fire, all water? The single chemical is often preferable to the alloy.”

I felt hesitant, then said “I guess I’ll opt for earth, then at least I’ll feel grounded at the outset.”

“So be it: your vision shall be honed by a visit to the Atacama Desert, driest place on earth. It has claimed many lives, including those of now extinct forms, and preserved their bleached skeletons, so you will have a sense of living palaeontology. (Her terminology was so self-assured that it aroused no doubts; had I consciously projected my vocabulary onto her, or had she absorbed it as her inalienable right?) The desert lies beneath the clearest skies on earth; there the watchers of the stars can enjoy perfect clarity. At rare intervals, there is excessive rainfall; the seeds embedded in the arid surface burgeon, and there are dazzling spreads of flowers. In the course of your survey, you will see both the bare sands and rocks, and the floral carpets. Are they not in many ways like human beings, long submerged by deprivation, but surging forth with vents of light and floods of rain.”


Once every dozen years or so, a storm system sweeps across the desert, dropping a torrent of rain. When that happens, the dust turns to mud as thick as your freshly poured concrete.” (Charles Darwin briefly passed through this corner of the Atacama in 1835. In his journal, he described the desert as “a barrier far worse than the most turbulent ocean.”) My perspective was broadened to a panorama of epochs, punctuated by the inner earth convulsing and erupting as if in fury against the callous clutter of waves of invaders. Were those the roarings of Cai Cai or the upsurge of a benign force?

“Today, police and  now the military are trying to hold back looters in Concepcion and Santiago from looting supermarkets, shops and banks. Few supermarkets are open here in Santiago today for fear of looters. The metro is not yet functioning. There is a sense of panic in the air with long queues at petrol stations and the few shops that are open. This afternoon, when I had to travel through the older part of Santiago, I saw hundreds of buildings damaged, burst water mains and families with a few pieces of furniture living out on the footpaths.   The Terminal at the International Airport in Santiago was severely damaged and only now are a few flights arriving from overseas. People wanting to leave Chile have to travel over the Andes to the Argentinian city of Mendoza and from there fly to Buenos Aires."

Because of the location, adjacent to the long southern Chilean volcanic arc, and the frequency of large earthquakes in this region, both the 1835 and 1837 earthquakes have become critical pieces of evidence for the ongoing question of whether, and how, large earthquakes might lead to small  triggered volcanic eruptions.

The malice of Cai Cai may be giving mankind fair warning. Part of him may want to drive humanity towards his opposite.

Through the power of Tegualda, my creed, my world-conquering people had met their total match. I was destroyed, hacked, burned, but then revived, transformed. I realised we were each a mote, a piece of grit in the world’s oyster; now we are eternal pearls, capable of gracing any glass case in any museum on earth or beyond.

I realise that it’s dangerous to get bogged down in myth and abstraction if it blinds one to the real, the contingent; one must look at events, at terrains, at particles, with a fully critical eye.


What has gone on in the interim? Yes; I had been a fashionable supporter of Allende, who tried to restore a measure of justice to that oppressed land. But now I had the full picture, in terms of human history, of geological and cosmic time. It must be possible for someone really determined to pull things together, sustain a sense of proportion, and simultaneously have ones exciting adventures. Escapist reverie is often a blanket to block off realities and responsibilities. But if one looks hard enough, reverie will reinforce responsibility; they can harmonise – become a synthesis of earth and air.

As I thought back towards my home base, I had a vision some crouched figures in a dingy internet café speculating on, and playing with, my experiences, which had been transmuted into a computer game. I discovered retrospectively that I had been digitally videoed all the way along. This area of research has so far been played down. I should be some source of fascination for those consoling themselves with history.

With its superabundance of spectacular scenery, the area of my expedition is now a top priority zone for fashionable holidays. Legislation goes on to protect the eco-balance. There are acts of desperation all round.

“Following a major earthquake in southern Chile in 2010, several nearby volcanoes permanently sank several inches into the ground. Cornell earth scientists think they might know why – and this knowledge could help illuminate the connection between earthquakes and volcanic activity.” Do volcanoes thrust upwards through an inner desire to sink downwards?

Publishing online June 30 in the journal Nature Geoscience, a study led by Matthew Pritchard, associate professor of earth and atmospheric sciences, shows that five volcanic regions within 248 miles of the 8.8-scale earthquake in Maule, Chile, sank up to 6 inches into the ground after the earthquake, almost instantly. This process, called subsidence, has never been seen on this scale in volcanic regions and, according to Pritchard, could lead to insights about the “plumbing systems” underneath volcanoes.
Earth scientists have long known that earthquakes sometimes trigger volcanic eruptions. Again in Pritchard’s words: “In this case, there is strong evidence that earthquakes are also promoting some other kind of activity, which doesn’t lead to eruption in the volcanic region.”

The Maule earthquake shared similar subsidence patterns with a 2011 earthquake in Tohoku, Japan, which earth scientists in Japan happened to be studying at around the same time. After comparing notes at a conference, the two unrelated research groups came to “eerily” similar results, Pritchard said: Both earthquakes seemed to induce subsidence around certain volcanic regions. 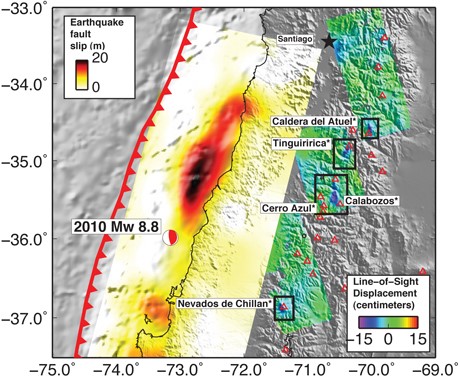 The Cornell researchers mapped the five distinct areas of subsidence following the Maule earthquake using radar imaging technology from a Japanese satellite. They think the sinking was caused by the release of extremely hot water from below the earth’s surface, or geothermal fluids, that eventually flowed out of surface streams in the area.

In volcanic areas, magma chambers under the crust heat up mineral-rich pockets of water – a resource that geothermal energy companies are trying to tap. Pritchard and colleagues contend that during the Maule earthquake, the mineral deposits were shaken loose, unclogging some pathways – like unclogging pipes in a house – which allowed a rush of water to gurgle to the surface, leading to the sinking.

Using the radar imaging technique called Interferometric Synthetic Aperture Radar, the researchers documented subtle ground deformations by reading changes in electromagnetic signals as they bounced back from the earth to the satellite. They also used sensors for infrared imaging of heat anomalies, helping them rule out the theory of subsidence being the result of a release of hot gas.

They hope their insights will inspire other scientists to continuously monitor volcanic areas in earthquake zones to further study the relationship between them – particularly, whether the subsidence is somehow either stopping or enhancing volcanic eruptions, Pritchard said.

Also, they want to discover the parameters for triggering the subsidence – how big does an earthquake have to be? How far from the earthquake zone will a volcano have to be to sink?

The paper, “Subsidence at Southern Andes Volcanoes Induced by the 2010 Maule, Chile Earthquake,” includes co-authors Jennifer Jay and Scott Henderson, both graduate students with Pritchard’s group, as well as collaborators Felipe Aron, a Cornell graduate student from Chile, and Luis Lara of the National Geology and Mining Service of Chile. The work was supported by NASA.

“Leon revealed a startling piece of information that served as the key to unlock my own door of perception.  He said there was a cultural tribune established under the Allende revolution that voted on a style based on mathematics (sacred geometry).  Surely this forgotten history explains the mysterious title of Bolano’s posthumous masterpiece, 2666!  While six is the hexagon structure of the DNA molecule, the secret of life, it is also the number of the hieros gamos.  The structure of 2666 consists of the sacred geometry of the pentagram, which represents Venus, due to the planet’s perfectly symmetrical cycle.  So, by absorbing the underlying message of the repression and return of “el feminino,” the reader/participant is initiated into the Aquarian archetype – the divine marriage of opposites – which Wolfgang Pauli, the father of modern science, predicted as emerging from under the collapsed quantum wave.” (Lisa Paul Streitfeld)

Can we tame the cosmos after all, or does this aspiration amount to considering ourselves as Gods – the cosmos has to be greater than ourselves?


Reading, absorbing all these factual, scientific data in a way undermined the impression of solidity and stability given by a superficial observation. It engendered the idea of a disintegrating world, and gave total magical power to any mythological saviours. The bleak light of analysis draws one back to the reassurance of darkness.

(“I do not love you as if you were salt-rose, or topaz/or the arrow of carnations the fire shoots off/I love you as certain dark things are to be loved/in secret, between the shadow and the soul.”
– Pablo Neruda)
Posted by DuanesPoeTree at 7:30 PM