PEARLMAN
PART VII
Our sacred embrace imploded Chemistry and Physics, through fusion and fission forging a new element, the compartmental boundaries seemed to melt as did the separateness of our bodies. The newly formed chemical element vanished quickly in a flash of radiation that only top scientists could measure.

Part of me longed to have one eye at the back of the head, one at the front. I had to be pulled in two vital directions without splitting at the middle. The depths of antiquity must breathe through the present, science and myth have our true lovers’ fusion. All these charts, articles and reports, from the new priests resonated, as if from both heaven and hell. Their statistical details mirror the poetic utterances of the visionary. The laboratories, newspaper offices and broadcasting stations became as awesome and forbidding as the ancient temple sites. Their operatives seemed to parallel my idea of the ancient priests, so expert in the art of concealment.

That flash, or ‘fingerprint’, confirmed the existence of an element with 115 protons at its center. That would give it the atomic number of 115 on the periodic table, the list of all elements known to humanity. Could that element be the key, to tip the balance of the cosmos? Could human entities be distilled into elements?

So the enormity of scientific facts threatened to overwhelm me. In their very coldness they had the quality of fire, an inner intensity that dwarfed my analytical reason. I needed the counterweight of serene passion to stay abreast of the data, see, microscopically, beyond them – and that counterweight radiated from my goddess. Tegualda’s alter ego, constantly reincarnated and resurfacing through the centuries. Remains firmly fixed in my mind: “She was a dramatic still presence with long black hair and a flaming dress with blood red lipstick, whose eroticism overshadowed a sexualized dance performance on the floor, fusing of the Spanish and Indian into a holistic love, integrating the opposites.” (Lisa Paul Streitfeld) 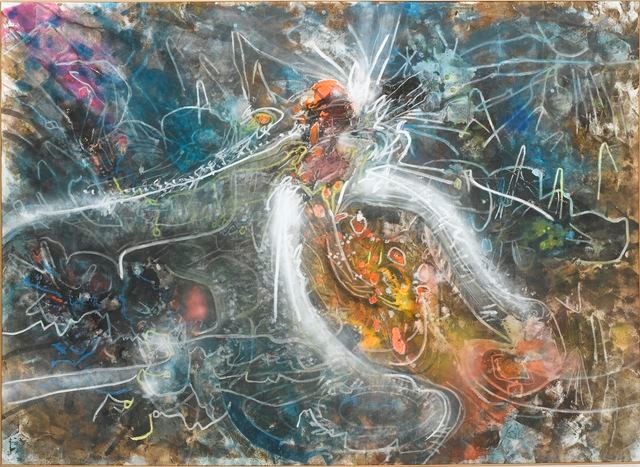 It’s a mother, it’s a world, but it is a wave.  If you go next to a mother, you feel like you are the wave next to you that irrigates you.”  There are human waves, and waves engulfing humanity.

Lovelies
Electric and naked in burning marble out from the skin through dresses,
swelling, defiant on a quick tide,
they stomp the world, they stamp the lucky star with their spikey heels,
and they sprout up like wild plants in the street
and put out their hard aroma greenly.
Warm ungraspables of buzzing butcher summer.
Neither roses nor archangels: homegirls, riddles
to man, and something more than sparkling heat,
something so much more than these bending branches
that know what they know as the earth knows.
So light, so deep, so accurate these smoothies. Hunting
blue eyes and other urgent flares in the dance
of the fast streets. Females, females
in the hoarse surf where we hurl the net of the five senses
to come up with barely a kiss of foam.

Daughter of the abyss, silent in your spite . . . (Rojas)

She is all air and all water, all animal and vegetable tissue, all soil and rocks, cold and molten, the polarities of heat and cold, the depth of the earth and the height of the heavens.

I turned into mineral, I turned I turned into ore, then concentrated in an unicellular being. My being proliferated into myriad particles, and each particle fused with the multiple essences of Tegualda’s multiple being – a whole body becomes a cell, and the cell a whole body. Now I have my body back, my heart pulsating.

I had to find what their writers had to say, starting from inside the situation, without my observer’s stance. Oh Bolaño! You have turned me into an Infrarealist!

“Sensations aren’t derived from nothing (most obvious of the obvious), but from a reality conditioned, in a thousand ways, by constant flux.

“Multiple reality, you make me puke!

“So, it's possible that on the one hand we're being born and on the other we’re in the front row for the death throes. Forms of life and forms of death crisscross our retinas every day. Their constant collision gives life to infrarealist forms: THE EYE OF TRANSITION! . . .”

The  newborn and the dying look each other in the face, complementing the vision of love. It’s great to have something to write about. I read, I write, I live, forever warmed by the eternal flame.
Posted by DuanesPoeTree at 7:20 PM