ON A SOUL'S LIFE JOURNEY - With Oscar Wilde

Here we both were on that sad day, 26 April 1895, in London at the court in front of that devouring public.

“Oscar, I can hear the prosecutor Charles Gill asking you what is the ‘love that dare not speak its name'?”

Oscar starts to breathe out his reply so slowly, “I was at first hesitant, then spoke firmly, ‘The love that dare not speak its name’ in this century is such a great affection of an elder for a younger man as there was between David and Jonathan, such as Plato made the very basis of his philosophy, and such as you find in the sonnets of Michelangelo and Shakespeare. It is that deep spiritual affection that is as pure as it is perfect. It dictates and pervades great works of art, like those of Shakespeare and Michelangelo, and those two letters of mine, such as they are. It is in this century misunderstood, so much misunderstood that it may be described as ‘the love that dare not speak its name,’ and on that account of it I am placed where I am now. It is beautiful, it is fine, it is the noblest form of affection. There is nothing unnatural about it. It is intellectual, and it repeatedly exists between an older and a younger man, when the older man has intellect, and the younger man has all the joy, hope and glamour of life before him. That it should be so, the world does not understand. The world mocks at it, and sometimes puts one in the pillory for it.”

“Dear Oscar, I’m a citizen of a world where many view this kind of love differently. Our world now, about a century and a half after your life journey here, is so, or let me say, too open to all human experiences, adventures, relationships, and caprices.”

“It was in my century misunderstood, though. So much misunderstood that it may be described as the love that dare not speak its name!”

“I see, and on the account of it you’re placed condemned at this court.”

“You spoke well though but you could have also mentioned the claim that some philosophers of Ancient Greece had such intimate relationships with their disciples. I have a soul friend from 6th c. BC Greece who founded two schools, one of poetry and another of music. She was in close love relationships with her girl disciples.”

“Yes, Sappho, the feminine version of Homer, as the ancients used to see her. She was such a genius poetess and music composer who lived in the island of Lesbos from which the word lesbian came to be forged later. She has been thought to be homosexual although nothing of physical relations was found in the fragments which had remained of her poems after the burning all of them in the Middle Ages. I guess you know better than me about it.”

“Not everything though, but it is always the unreadable that occurs.”

“However, let me tell you, I do believe in love. Love is universal binding together all mankind in spite of all differences. It’s able to cross borders of race, color and belief. It may challenge many taboos. However, expressing love through physical contacts should be considered with a profound spiritual and social awareness.”

“I can resist everything except temptation.”

“However, we should resist as much as we can.”

“Resist it and your soul grows sick with longing for the things it has forbidden to itself. I just leave myself…

To drift with every passion till my soul
Is a stringed lute on which all winds can play.

Do you really think, my friend, that it is weakness that yields to temptation? I tell you that there are terrible temptations that it requires strength, strength and courage, to yield to.”

“There’s also, Oscar, the experience that temptation leads to sin against one’s self and others.”

“Believe me! There is no sin except stupidity. The supreme vice is shallowness.”

“But, apart from religious views and taboos, the so-called sin is above all a psychological failure that can lead to dangerous ends.”

“All sins, except a sin against itself, Love should forgive. All lives, save loveless lives, true Love should pardon.”

“Well, some would see sin as a search for getting a prohibited pleasure. I think man was made to seek for his self-fulfillment, not to just enjoy passing pleasures.”

“What man has sought for is, indeed, neither pain nor pleasure, but simply Life. Man has sought to live intensely, fully, perfectly. When he can do so without exercising restraint on others, or suffering it ever, and his activities are all pleasurable to him, he will be saner, healthier, more civilized, more himself.”

“I agree pleasure is needed, but is it everything?”

“Pleasure is Nature's test, her sign of approval. When man is happy, he is in harmony with himself and his environment.”

“It all depends on what kind of pleasure we’re talking about.”

“Just to drift with every passion, till my soul is a stringed lute on which all winds can play.”

“Where are then the limitations human reason sets for us?”

“One is tempted to define man as a rational animal who always loses his temper when he is called upon to act in accordance with the dictates of reason.”

“What a description of human beings! Listen dear! I’m far from perfect myself but I do believe that passions can transcend and metamorphose into other levels of expressions and creative forms of action. All genius works of art, music, and literature as well as humanistic contributions of all kinds can prove that.”

“Life imitates art far more than art imitates Life. No great artist ever sees things as they really are. If he did, he would cease to be an artist.”

“I believe that art traces the plan of Utopia on the face of the earth.”

“A map of the world that does not include Utopia is not worth even glancing at, for it leaves out the one country at which Humanity is always landing.”

“Excuse me, but an extreme individualism, even in art and literature, can be an egocentric trend. That may involve the love you’re trying to defend being an inspiration of artistic creativity.”

“I insist that the love I’m condemned for dictates and pervades great works of art. How about Tchaikovesky’s great musical works? I once said it clear: All art is immoral.”

“Haha, you know? I’m listening to his PATHETIC at the moment while I’m writing my conversation with you. Believe me, I can read every melodic phrase of this symphony as if depicting his deep regret for having had such love.”

“Is that what you think?”

“For sure! The consequences of following pleasures are dangerous especially when we are dragged into extreme unknown depths. This is good advice I’ve heard from many.”

“It is always a silly thing to give advice, but to give good advice is absolutely fatal. I always pass on good advice. It is the only thing to do with it. It is never of any use to oneself.”

“What we do need is moderation.”

“Moderation is a fatal thing, my friend. Nothing succeeds like excess. Yes, I could resist anything but temptation. However, sometimes it was like feasting with panthers; the danger was half the excitement.”

“Anyway, the ends of our journeys may count more than the side alleys we may drift into.”

“The good end happily, and the bad unhappily. That is what Fiction means.” 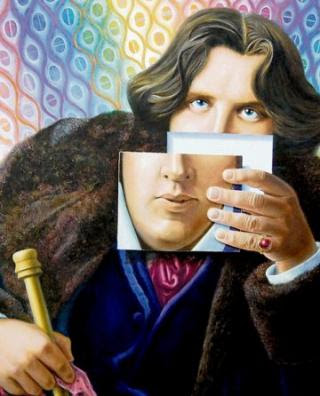 The Storyteller -- Aidan Hickey
Posted by DuanesPoeTree at 8:19 PM