ON A SOUL'S LIFE JOURNEY - With Oscar Wilde

Through one of my longest nights, here I find myself at a great cemetery that I could recognize as the monumental Père Lachaise in Paris, under the dim stars counting the nights of 1909. With wide open eyes, I’m trying to read a huge epitaph standing before me:

“And alien tears will fill for him
Pity’s long-broken urn.
For his mourners will be outcast men,
And outcasts always mourn"

And here I’m, whispering in response,

“Not able to hold my tears
That start running down
To fill the same urn.”

“Why are you so moved? Life is far too important to be taken seriously.” A voice that sounded like a breeze melody wafting through the shadows of the lyrical grave to find its way to my ears. The voice continues after a short bitter laugh. “Death must be so beautiful. To lie in the soft brown earth, with the grasses waving above one's head, and listen to silence. To have no yesterday, and no tomorrow. To forget time, to forgive life, to be at peace.”

Shivering as I get to know that his own soul is talking to me, I just try now to gather together my courage to ask him. “This must have been your idea about death long before you wrote these sad verses. Oh, Such a beautiful poem!”

“From THE BALLAD OF READING GAOL.”

“Ah, was this the work you had suggested be published in Reynold's Magazine?”

“Yes, because it circulates widely among the criminal classes – to which I now belong – for once I will be read by my peers, a new experience for me.”

“I remember it was a commercial success, going through seven editions in less than two years, only after which, your name as ‘Oscar Wilde’ was added to the title page after you had had to hide your name. It brought you a little money during those impoverished last three years of your life on earth. Right?”

“Yes, this poverty, where I lived in my final address at the scummy Hôtel d'Alsace in Paris, really breaks one's heart: it was so SALE, so utterly depressing, so hopeless, I wrote to my publisher, pray do what you can!”

Here, I ask him curiously, “Outcast!? Mourning!? Criminal classes you belong to!? Would you please explain!”
His voice sounds like a long sigh carrying what it could of word loads. “I wanted to eat of the fruit of all the trees in the garden of the world... And so, indeed, I went out, and so I lived. My only mistake was that I confined myself so exclusively to the trees of what seemed to me the sun-lit side of the garden, and shunned the other side for its shadow and its gloom.”

“Because a sentimentalist, like me, is simply one who desires to have the luxury of an emotion without paying for it.”

“Yes, I remember you used to say, ‘A dreamer is one who can only find his way by moonlight…’”

“… and his punishment is that he sees the dawn before the rest of the world.”

“Having that punishment of seeing the dawn before the rest of the world. You know? Sometimes I tend to agree with you about that.”

“Tell me, what does that have to do with the shadow and gloom of the garden of the world?”

“My only mistake was that I confined myself so exclusively to the trees of what seemed to me the sun-lit side of the garden, and shunned the other side for its shadow and its gloom.”

“How is that? Has the sun-lit side of the garden been so tempting?”

“Yes, and the only way to get rid of a temptation is to yield to it.”

“However weak we may be, I think we should continue to resist.”

“Resist it, and your soul grows sick with longing for the things it has forbidden to itself.”

“But the end would not be so tragic my friend. Right?”

“Right, and no man is rich enough to buy back his own past.”

“Why Oscar, what really happened?”

“’The train has gone. It's too late’, is what I said when my friends advised me to escape to France, avoiding my prosecution.

“I was arrested for gross indecency under Section 11 of the Criminal Law Amendment Act 1885, a term meaning homosexual acts.”

“And what was your sentence?”

“The final trial was on 25 May 1895 when Alfred Taylor and I were convicted of gross indecency and sentenced to two years' hard labor.”

"All trials are trials for one's life, just as all sentences are sentences of death." 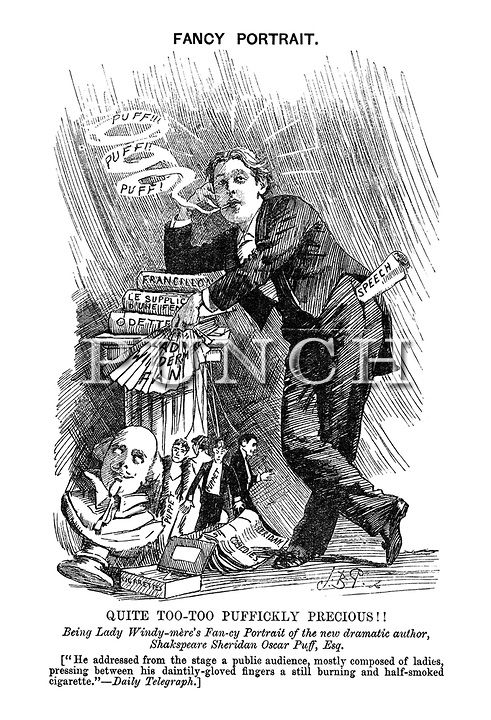 Posted by DuanesPoeTree at 8:21 PM