Introduction to "A Walk on Lone Tree Mountain"


Currently our hill
is called “Saddle Mountain,”
because of its shape,
and also “Empty Crag Hill,”
in honor of “Empty Crane,”
the 15th century geomancer
monk who chose Seoul
for the capital of the
Jo-seon Dynasty (1592-1910)

According to the missionary
Horace G. Underwood III,
who passed away at the age of 91,
when he was born in 1917 and grew up
on the campus of Yonsei University,
founded by his grandfather,
Horace G. Underwood I,
the neighboring hill was called
“Lone Tree Mountain,” Aside
from the two old elms
at Adorn Greatness Temple,
no other trees gave company there.

All else, including shrubs and roots,
had been cut down or dug up
by poor, cold and hungry natives
for firewood, fuel for cooking,
heating and baths, or else
to supply the Japanese
colonizers during their
Chinese war (1931-1945).

Up until the 1970’s,
photographs show the hill barren,
only rocks blackened by fire.
Afterward, with prosperity, people
could rely on charcoal, oil and gas
and no longer consumed wood.
As a result, the slopes felt free
to be revived by Nature’s hands.
Some seeds floated over
on air, in bird feathers or
on nomadic animal fur,
also, humans’ garments,

Inaugurated in April 5, 1949
by President Rhee Syngman,
and enthusiastically encouraged by
President Park Chunghee in the 1970’s,
Arbor Day tree planting
became a patriotic duty
for all South Koreans.

Citizens trooped up this and
all other bald, beaten hills, torn up
by great wars, to plant cherry,
mulberry, plum, Rose of Sharon,
azalea, forsythia, magnolia, etc;
and flowering medicinal herbs,
until every inch of the slopes was
glorified by a rich variety of plants, a
virtual Eden, bursting with fascinating
shapes and colors, textures and scents.

These attracted pollinating insects,
like native rock and big pumpkin bees,
butterflies, crickets and cicadas,
centipedes and spiders, moths,
a sluggish species of mosquito, etc..
Of course, hungry birds dined here,
chirping and changing with the seasons,
such as pheasants and nightingales,
owls and hawks, hoopoes and
giant jays, pigmy woodpeckers and
orioles, turtle-doves and magpies,
and on the crags, crows.

Critters took up residence, too,
no more tigers and leopards,
bears and wolves, mostly
chipmunks and flying squirrels,
families of gipsy toads and frogs,
plus a couple of nasty snakes.

Humans were drawn to the slopes on
early mornings, after work on
late afternoons and holidays
~ old men would wile away their days
carefully playing Chinese checkers
or Japanese Go by the numerous
“medicinal” springs and exercise parks.

An American would frequent those paths;
ones that ran every which way to fresh
delights. He would be driven by his wife
to Seoul Foreign School each morning,
deposit their small daughter safely
on campus and then stroll out the back gate
alone into the magical refuge of green hills
which he would traverse by ever-new routes
on his way home.

Nightly, while others frequented bars, he
would return to the mountain, climbing through
the temple grounds to drink of flower and leaf,
rock and pond, again. Under the full moon,
the reflection of city lights on clouds,
or else in dark air, he could feel his way
cheerfully along.

Variously he attended an owl solo,
a nightingale duet, a frog chorus,
or cricket concert and over a period
of a dozen years produced a memory
of a growing island of green in the city,
this poem

Now the mountain has gotten back
its original names, An San,
“Saddle Mountain,”
and Mu-ak-jae, “Empty Crag Hill.”
Until the 20th century, signal fires were lit
on its peak, relaying messages
between the capital and the Chinese border,
as well as down south along the peninsula.

During childhood, Horace G. Underwood III
rollicked on a snow sled here.
His grandmother was shot by communist
guerrillas who had knocked on her back door,
while she was serving the family tea.

After General MacArthur’s landing
at Incheon Harbor
on September 15th, 1950,
four days of bloody fighting ensued
against North Korean soldiers
dug in here on what
the U.S. Marines attackers
called “Hill 296.”
1, 200 NK troops died, and some
American companies suffered
up to 85% causalities.
Elderly neighbors can’t forget
seeing bodies of men, women
and children strewn all over.

Only a few survivors can recall such,
and appreciate the changes.
Now, up on Lone Tree Mountain,
overlooking the great and wonderful
City of Seoul, you can. 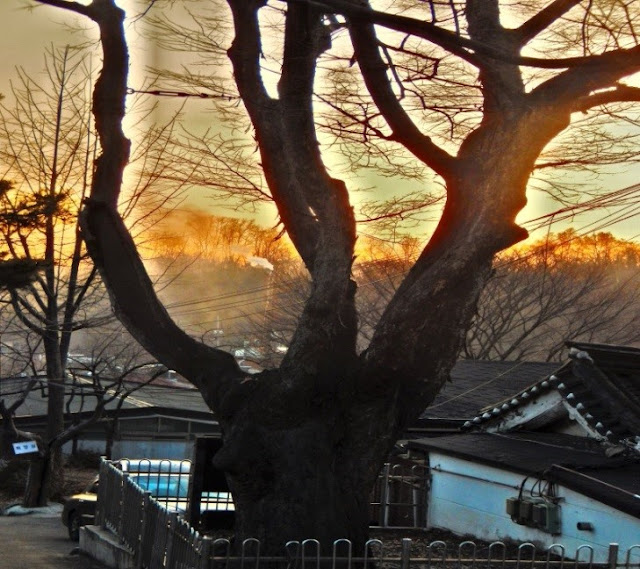 Posted by DuanesPoeTree at 5:03 PM