Mary napping beside a low fire;
a small sealed box under one hand

Today
the churlish memory
chose to
select a dream I partly failed
to put away the treasonous year
it ran a taunting course
like the amorphorous clouds just now,
teasing,
in no hurry,
content to detain the sun,
steal from me
the Past’s sympathetic return.
To deal with
the needs of a dream,
sanely,
dangling as usual,
a brave doubt between the dross & the pangs
I saw our bond
strangely become,
a crude shift he
sheathed in gainful concern,
triumphant too often,
late in in those last years
we tried to redeem.
A sly attempt
to sate the loiterous jealousy
ushered the ruinous gait of
his spry craving
into the lunacy I knew well,
our sturdy losses steering us
easily toward the eventual Others
I revisit as their faces
peer from the clouds,
first his,
a gaze of slight & scurrility.
Then her,
leering from the dreamy pleasure-house
in a poem,
where she’s to be lady of the solitude,
and, cagily together,
below the tower
they’d become One,
a lust,
a loss,
a lie,
alone on his swollen island.
All this paradise,
the jocose makings of
a steep deceit,
adrift like the cordial sorrow
I deftly shift within.
All this,
ill-bred,
scheming,
poorly imprisoned in a poem,
his beautiful wreck,
a silence where
their fictitious love attempts to speak…
there was so much left to dream. 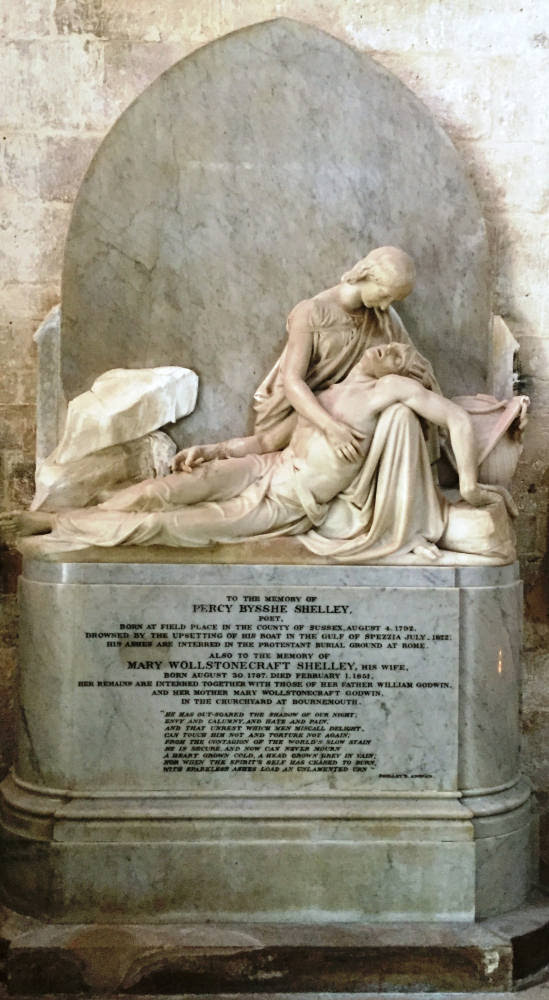 Shelley Memorial, Christchurch Priory, Dorset -- Henry Weekes
[The memorial commemorating Mary mourning Percy's drowned husband had previously been refused by St. Peter's Church in Bournemouth, where Mary was buried with his heart and the remains of her parents William Godwin and Mary Wollstonecraft.. Their son Percy Florence Shelley presented it to Christchurch. The inscription is from Shelley's Adonais, written in honor of his dead friend John Keats: "He has out-soared the shadow of our night; / Envy and calumny, and hate and pain, / And that unrest which men miscall delight, / Can touch him not and torture not again; / From the contagion of the world's slow stain, / He is secure. and now can never mourn / A heart grown old. a head grown grey in vain; / Nor when the spirit's self has cleared to burn, / With sparkless ashes load an unlamented urn.".
Posted by DuanesPoeTree at 9:54 AM