Bunting waved lazily from the pier.
We met Mickie Mouse on the prom,
shook paws, posed for a photo.
By mid-week we were sea-struck,
hoarded shells, listened for its song.
We laced our ankles in foam, built
castles fit for royalty, added flags
like those over Buckingham Palace
that Wednesday in July: London
crowded, colour T.V. in our hotel,
cold buffet and champagne for lunch.
I watched the screen as Lady Diana
stepped from a glass horse-drawn coach,
wore the Spencer tiara and beaded
crinoline of ivory taffeta silk
unpicked and restitched four times.
(She’d grown thinner and thinner,
media-feted and pursued.)
But she sparkled inside St. Paul’s,
took the weight of her father’s arm
up the long aisle to the high altar,
smiled at her Prince, muffed
his name and exchanged vows.
Here is the stuff, Archbishop Runcie
declared of which fairy tales are made. 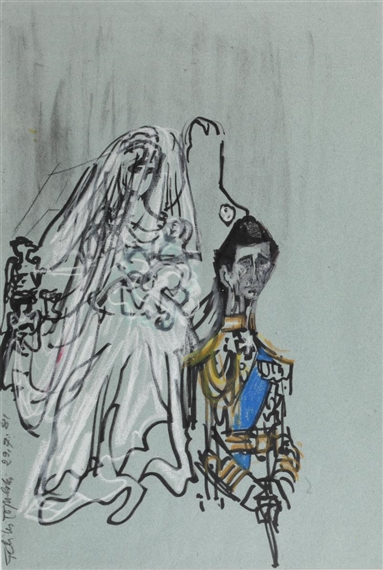 The Royal Wedding of Prince Charles and Lady Diana -- Felix Topolski
Posted by DuanesPoeTree at 2:04 PM