I've no idea what his name is;
I know he smells nearly as bad as me,
that wax-jacket pong of girder-thickened grease
and those scientific unknowns -

the 60s purple - and Texas oil-black.
He sits near me, U.S.A Today telescoped beneath his paternal arm,
it's not as if the poor bastard can read,
more like that possessive pre-fetishisation,

like John Wayne's paper in The Shootist.
A day was more than sentence, word, perhaps even life -
the world and man welded to tumbleweed streets;
he thinks "you and me baby, 24 hours, then midnight, everything just dies".

Perhaps this train's his pumpkin carriage,
and the cancer, like Duke's, will give him a few more years.
Tonight he'll sleep near Union Square,
the glistening stones

like stars where John Bernard Books lay down his head;
When I pass him in the morning, he's the same ethereal mass 11 stories down,
except when I get closer
he's vivid enough for a name;

I'll call him Chester,
I'd like to think mom and pop thought that way.
Men were called Chester when haircuts were tight
and station-wagons licked picket-fences

like stars graze heads
and cherubic city-stone.
He calls me, "hey sir, you were on that train yesterday..."
The Top Cat theme-tune, Nelson Riddle

and buzz-cut hairstyles
ignite my brain,
and Chester finds another few stars
ruffling through his hair 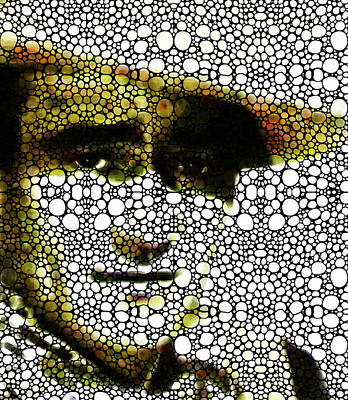 The Duke - - Sharon Cummings
Posted by DuanesPoeTree at 5:53 PM