On the Making of Karma

I was a soldier, but no longer.
I’ve paid the soldier’s dues.
My wounds have healed.
I’m old,
I owe no more.

Conscripted to that job
I did not run away,
but stayed from hunger,
not through fealty.

I no longer had to fight
the soil or sea to fill my belly.
My grumbling was as stifled
as my stomach’s growl.
Though never fat,
my ribs were not apparent.

I did as I was ordered,
moved around the battlefields
like any other soldier
until each campaign was over
and was on hand
when and where the next began.

I was sword and shield and spear,
strong enough to rent,
too expendable to own.
Did my job, they fed me.
That worked well enough
for all concerned.

One day I was on duty
at the bottom of a hill,
policeman doing crowd control,
shepherd tending many sheep,
multitudes taking in the sight
gaping at the three ring circus.

I made my way among them
on the lookout for
pickpockets, thieves,
potential rabble rousers,
disturbers of the peace.
At the far fringes of the crowd
I had to tip-toe to see
what they were seeing,
and none of it that clearly.

Those arriving early
got the better view,
but at the highest cost
with so many others
pressing from behind.

Ordered to this town,
but never to this place
until this morning,
we’d marched all night
because of rumored trouble.

There were three crosses on the hill
with three men pinned upon them,
surrounded tightly by our soldiers
to keep the zone around them clear.

I’d seen all this before –
it was our way,
our final justice,
to weed our garden
and keep the fruit our own.

The crowds were larger
than I was used to seeing.
It was my impression
that many were not local,
but had come some distance
on the basis of a rumor
that this event might be unique.

Bookmakers were doing well;
they had a piercing eye;
some said that they should hire
the man slowest to die
to bring them luck.

He must have known the risk
when he appeared to contradict
Roman authority,
this Jew.
He surely knew he trespassed
upon the air of Empire
calling himself, they say,
King of the Jews.
Or was it others called him that?

A threat he was
is what they say,
hearsay to me;
I never heard the man.
This is what they also say:
he never stole or broke the law;
he never hurt a soul,
or cheated any one.

Another rumor
among the temple guards
is that Pilate said he’d free him
if he’d plead his innocence.
It’s said that he refused,
giving his judge no other choice.
Politics is above my head,
which I know to keep well down.

As he dies
the peace is kept,
not by our presence,
but by their apathy
as the crowds begin to thin.
The sheep are going home;
they’re hungry,
thirsty;
tired,
and like us,
bored.

Past their rowdiness,
the drunks are bleary,
too drowsy to be rowdy.
I, too, could leave
and not be missed,
but this is my post,
my job,
a sort of scarecrow
in a kind of garden,

Now that I can,
I move in closer,
but can’t yet tell
if they have died,
they are that still.
One or more
might still be breathing;
That’s what kills them:
Suffocation,
when they stop.

Watching crucifixion
is not the most exciting
thing to watch.
Undramatic, lacking power
of a play or pageant,
the last of life leaking
from a defenseless man,
no gladiator,
Jesus, they call him:
enemy of the State,
the state has called him that.
He looks so small
up there from here
in my corner of the state.

I have eaten, am not hungry
and feel no need to rest;
it has not been a trying day.
My fellow soldiers have divided
the clothes of the condemned
and are growing growly,
having had a bit to drink.
By the time the crowd
has nearly gone
they have done their duty,
they feel no need to stay;
the dying and the dead
will not run away.
Those of the crowd
who’re closest
to the three crucified,
their relatives and friends,
have also gone
with the leaving of the light.

Being asked, I volunteer
to maintain this post alone.
Tired of doing nothing,
I would rather do it by myself.
I am not superstitious;
some of the others are.

Looking back on all of this,
from the end of life, my own,
this day that I remember well
comes back to mind repeatedly
because it’s not the same at all
as others have described it.
There was no storm, no wind,
no rending of the temple drapes.
There was no eclipse.
I was the only one
near enough to hear
the dying words of dying men,
if indeed they said them,
but for the one thing
that sharpened memory,
stuck freshly within it
as if it stayed in front of me.

Throughout the night
I heard faint signs of suffering
grow ever fainter
till there seemed
to be none at all--
only dead silence.
Unsurprising that
they didn’t speak,
they couldn’t
in their position
in mute torment,
to die so long
before they’re dead.

With the coming of the dawn
as I was leaning back
against a post base
a voice above me spoke
almost too low to hear.
"Stand back,” it said,
with urgency, a warning.

I scrambled to my feet
half in fright,
half in simple urgency.
As I ran I heard a crack
much like the sound
of timber being felled, a tree,
and the cross fell toward me.
It landed, raising dust,
enough that it was hard to see
until it settled,
and unsettled me.
At my feet was not a cross,
with a man still on it.
What had been was now
a giant sunflower.

I heard a voice then
from nothing I could see,
which said, “Take one seed.”
That’s all it said,
the end of it.
I did as I was told.
I put it in my pocket
and kept it ever since.
It came with no instructions
to tell me what to do.
I didn’t understand
and I’m still waiting.

I remained a soldier
until my wounding,
then retired to my family home
to heal and ponder.
Rumors of that day abound,
increasing, spreading
based on witnesses’ accounts
of what they saw that wasn’t there,
inbreeding into bastard lies.

I have never
doubted my sense or senses.
I am a simple man,
though not without imagination.
I’ll listen to or tell a tale,
they all go well with wine.

I know what I see
when I see it,
as well what I’ve seen,
and what I haven’t.
Clearly, this is true.

I reach into my pocket,
pull out my hand,
look at what is in it:
a sunflower seed.
What more can I say? 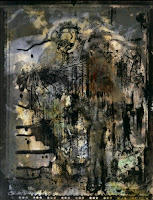 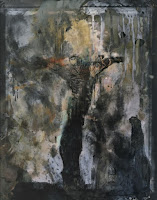