EMPRESS WITH A PEN!


Fountain pen unfurling from the curls


After the blood carpet why history never unfurls


Everyone makes a full stop with decoration


To declare how it's “The End of Imagination”


Millions think of the magician thinking above


Her pen thinks how he bluffs wearing a glove


To validate that they work on the poem of sins


With blood flowing from the sandwiched valleys


Arrests for the Mao-Tse-Tung brigade


To let Godse and Savarkar work on the grenade


Bits of this cosmos carry a thousand graves


Each one of the killers bluffed by money waves


Spraying the dogma of “What can and cannot be said”


Letting the Constitution to fade!


Birsa Munda flies like a simple God of small bits


Working on the revolution, not for the outfits


Traitor has been tagged over Netaji and his parades


One grasshopper listens to the other


Squeaky sound working on its hymn as eraser


Peter England waits to capture the art of Adivasis


To rot away the embroidered babies!


Summing up the ‘a’ and ‘b’ of algebraic injustice


Obtaining a result which fulfills the regal fantasies


Puffing off the crescent smoke from raw lips


She walks on the jungle smiling over the tulips


After the rich buckets have worked on Harry Potter


To make the world see “The Ministry of Utmost Happiness”


From banning to death threats to be named as traitor


Her words live for the brush never leaves the painter


She still walks to settle the blood from flowing


And to keep the sun glowing! 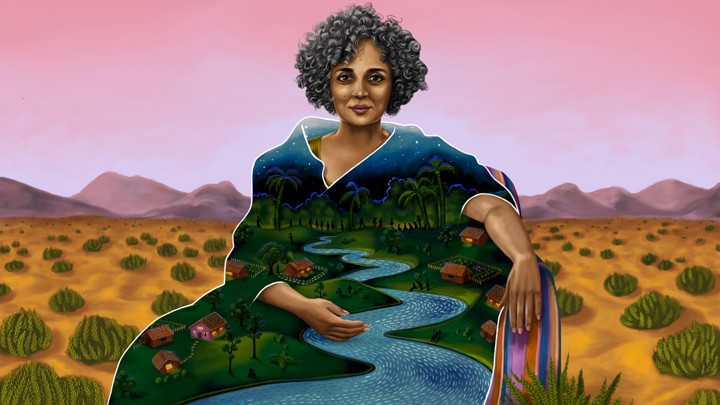 Arundhati Roy -- Shyama Golden
Posted by DuanesPoeTree at 11:59 AM