Stories About Bud and Momma


There are a lot of stories told about my granddaddy Bud, and I guess now I am the only one left to tell them.

He was born on New Year’s Day in the year 1900, and we all felt that the dark side of our family followed him. He was a sad man, and he died in the summer of 1965. I’ve seen pictures of him when he was young, but that was a man I never met, a man who had left a lot of hard feelings behind him. My mother’s in particular. And a dead wife, who died young while still in her 20s. A beautiful woman, who some say was pregnant when she left here. I’ve heard two versions of her death.

Momma would get some whiskey in her and start to tell tales of how hard it had been growing up as Bud’s daughter. She liked to drink her whiskey straight with a sidecar of water. She usually drank sour mash. Old Crow when she was younger, Early Times in her middle years, and Jack Daniels in her retirement. She would get a little buzz on and tell me how hard her life had been growing up during the Depression years.

She would look at me with tears in her eyes and say in a soft, sometimes breaking-up, sad kind of a voice, “You don’t know, son, you just don’t know. You’ll never know.” And then she’d pour two fingers of Jack into a water glass and kill it in one drink, chasing it with a slug of water from an identical glass. “There was a time when I was a little girl and all I had to eat were catsup sandwiches. For breakfast, lunch and dinner, just one slice of bread with catsup on it, folded in half to make a sandwich.”

I always thought it ironic that years later, after growing up hungry, she would go to work in a grocery store. She worked as the front checker at the Kroger store for 27 years. She took a lot of pride in her job and a lot of pride in being the number one checker. Everybody in town knew her, and she claimed to know everybody in town by their first name. People would stand in her line when other lines were shorter just to pass the time of day with her. She was the first one you saw when you walked through the door -- long red hair, blazing blue eyes and a bosom that would make Hollywood envious. Ruby was a beautiful woman.

And the fire in her veins was equal to the fire in her long, full, thick hair. That’s what got her in trouble up in Washington, D.C., when she left the mountains for the first time and went up to the big city. That was the 1940s, and she was young and foxy and looking for fun. She had a job as a telephone operator, and until the day she died, she regretted losing that job and the life that would have gone with it. She lost it when she met a handsome sailor who never went to sea. I’ve seen photos of my father in his Navy whites, his dark brown eyes accentuated by a full head of black hair. Years later, women in their 50s and 60s would still look to the ceiling and roll their eyes when asked about him. It was almost like a ritual. They would say in a soft voice, while staring up at the ceiling, “He was a goooood-lookin’ man.” At this point I hadn’t met him yet, and it angered me to see that he still had such an impact on them 30 years or more after they had last seen him. He was a legend in his own time.

But Momma’s fire in her veins expressed itself in anger just as fiercely as it did in love. And that may be what drove my daddy off. That is what Bud said as he sat in his big old chair right there at the top of the stairs, looking down at me, peering over the top of his glasses. I don’t remember how old I was at the time but I do remember looking up into his eyes when he told me, “I would have left her too. You don’t know how mean she can be. Your daddy wasn’t a bad man.” By then, Momma had started her new life up on Indian Draft Road.

And up there, on the other side of Callaghan, I was given plenty of opportunities to see that other side of her later on, as she grew older and began to lose her beauty and grew bitter and more and more tired of working in a dead-end job for a boss she hated, of living in a house without a bathtub or a shower or even an indoor toilet.

She and R. J. drove nice cars. They had a color TV that only got two channels, CBS and NBC. They ate well, grilling steak outside nearly every night of the summer. But they were also drunks. And they drank their money and their dreams away. One time he brought home the parts for a shower that he planned to install in the house in about a day’s work. Momma hated taking birdbaths in the kitchen, standing there naked in front of the sink. She had complained, and he had grown tired of listening to her complaints. He set the parts down right out on the front porch and then went for a beer. And those parts sat there for years. They sat there until they rusted out and were thrown into the junk pile on the other side of the creek.

But they always ate well. My momma had two refrigerators and two freezers, stocked so full that you had to search for a spot to put anything more into them. There was always at least two of everything. Egg salad, ham salad, milk, juice, butter, margarine, lettuce, vegetables, fruit, ice cream. You name it; my mother had it in there. One of her favorite snacks was a slice of white bread with butter spread on it, topped with onions and cucumbers that had been sitting inside of the refrigerator in vinegar and water, with a little pinch of sugar in it. She would put lots of black pepper on it and then fold that sandwich in half. I never could get her to cut me a sandwich in the neat little 45-degree angle like they would at Fridley’s Pharmacy Grill. When I’d go to visit her, I would walk into the little storage pantry and look at all of the cans of food she had stacked up on the shelves and lined up on the floor and sitting against the wall. I’d ask, “Momma, why do you need so many cans of green beans?” I’d pick one up and sometimes find a little rust on the bottom of the can, it had been sitting there so long.

“David,” she’d say, “you never know when you might need that food.”

I didn’t understand then, but I do now. She grew up hungry, and planted down deep inside of her was the fear that one day she might go hungry again. In all the years she walked this earth, she never saw that in herself. But we could see it, my sister Lori and I, we could see it as clear as day.

She had another horrible memory that she kept locked up inside herself for years. She had kept it inside for a long time, and then one night Momma got about six sheets into the wind and told me something she had carried for almost sixty years without ever telling anyone. We were sitting at the kitchen table; she had a great big 1.5 liter bottle of Jack Daniels sitting there beside her, and I had a liter of Johnny Walker Black sitting in front of me. She poured herself a drink, drank it down, chased it with her water and then proceeded to tell me her story. I can still see her eyes and the look on her face as she leaned toward me.

She said that during the Depression, all three of them would sleep in the same bed in the winter to stay warm. Bud on one side and her mom on the other side. She said that her mother died in the middle of the night and that she knew it, and that Bud wouldn’t get up to call the ambulance to come and get her. She said she lay there all night beside her dead mother, knowing she was gone.

She never forgave Bud for that and never spoke kindly about him but maybe once or twice the whole time that I knew her.

But there is a different version of the story. This one was told to me on the day we buried my mother. It was after a small service where we had her ashes interred in the same grave as her mom. We put Momma’s little box of ashes just a few inches above her own mother’s casket. She’s buried right beside Bud’s unmarked grave and Pop’s wonderful big headstone, in chronological order. Three generations lined up on the front row of the Cedar Hill Cemetery.

They say my grandmother Beatrice was pregnant with another man’s baby. And that she had gone to someone for an illegal abortion. And that she couldn’t get the bleeding to stop. They say she went home and lay down and bled to death in her own bed.

Nobody knows how much Bud knew. 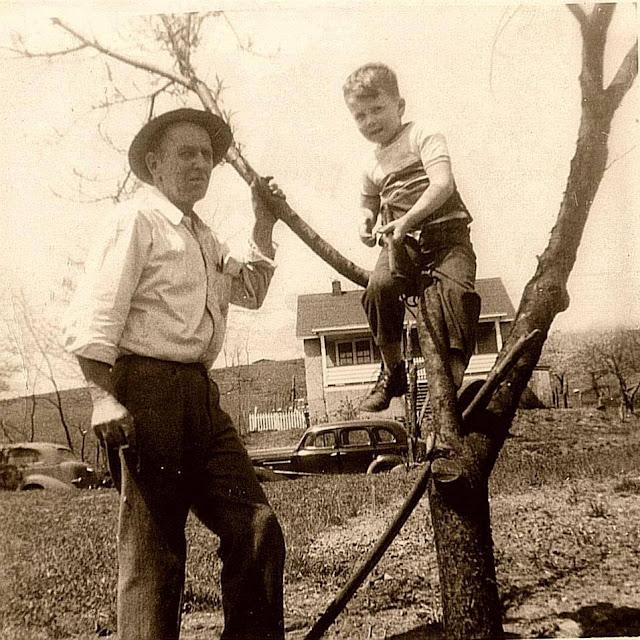 Bud and Little Davey
Posted by DuanesPoeTree at 12:50 PM