The longer I live the greater Martin Luther King looks
compared with those who have tried to carry on his work.
The man had integrity, guts, ideas and class.


It was heartbreaking in the Sixties to be young and
filled with hope for change in America, only to see
JFK, MLK and RFK murdered in the same decade.


Young people of all kinds had hope back then even if
we saw little change. We thought it was time for a quiet
revolution of ideas in America. That never happened.


My hope is Mike Pence doesn’t succeed Donald Trump
the way Lyndon Johnson succeeded Jack Kennedy. We must
find a peaceful way to get through these next four years. 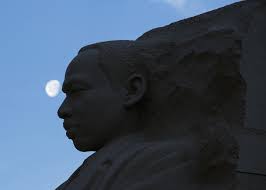